The Sun Rose in Paris: A Story of Love & Friendship – Free 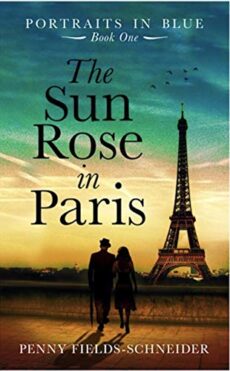 Jack has been praised all his life for his extraordinary artistic talent and is rarely seen without his sketchpad.

However, in Jack’s world art is considered a hobby – men are expected to have jobs that offer security and advancement.

Future responsibilities are far from Jack’s thoughts when he travels to London to visit relatives. On the crossing, Jack’s drawings astonish a fellow artist, Margaret. Convinced of his potential, she introduces him to the Bloomsbury set, exposing him to a world where peoples lives are dictated by passions rather than social conventions and art is central to their existence.

Accepting a thrilling opportunity to study modern art in Paris, Jack’s life is forever changed. He forms a deep friendship with fellow student, Andrés and his sister, Sofia, whose dark eyes and sweet smile captivate his heart. Together, the trio explore Paris at the height of its golden age. Mentoring from Gertrude Stein and Pablo Picasso affirm Jack’s talent, and he has never felt so happy.

Despite experiencing the richness and freedom of life of an artist, accompanied by the wonder and turmoil of perfect love, Jack is plagued by the responsibilities that call him home.

When tragedy threatens, Jack is torn: should he follow the well-laid plans for his future or pursue a path set to disappoint his family and which offers only uncertainty?