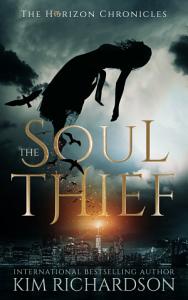 Worse, instead of meeting her maker, she’s pulled into the world of the Guardian Angel Legion: a secret band of angels dedicated to protect mortal souls from demons.

But Alexa’s life takes a thrilling and terrifying turn when she’s sent back to the mortal world to investigate a series of murders and missing souls when she’s attacked by a demon. But are demons responsible for the killings? Or is it something else?

To make matters even worse, an ancient, evil shadow grows over the world, and with it a force more terrible and destructive than the world has ever seen. Can Alexa find a way to stop it or doom the mortal world forever?

A fiercely entertaining fantasy filled with adventure, intrigue, and romance, the rich world of The Soul Thief is perfect for fans of The Mortal Instruments and The Dark Artifices.