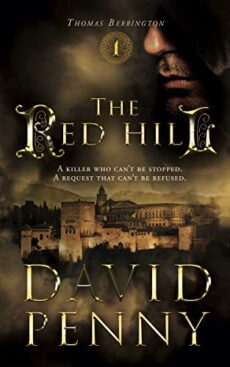 When death comes to the Alhambra palace a hero is needed … but did they pick the right man?

A demand is made of Englishman and physician Thomas Berrington – to investigate a series of deaths, each displaying the marks of a savage attack. At first reluctant he is drawn deeper into the investigation when one of the Sultan’s wives is brutally murdered. Teaming up with the eunuch Jorge the pair pursue the killer before another victim is chosen. As the investigation continues they discover nothing is as it seems and nobody can be trusted.

Al-Hamra, the palace perched atop the red hill, holds its secrets close. As the truth starts to be uncovered their discoveries culminate in a battle not only for their own lives, but for the lives of those they love.

For anyone who likes breakneck pacing, medieval murder mystery, and complex characters the Red Hill delivers a rewarding read.