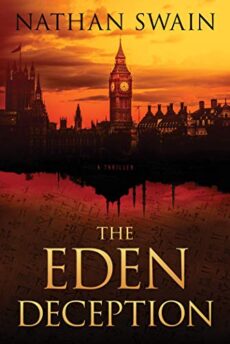 An American soldier discovers a beguiling artifact engraved with an ancient script.

In Cambridge, England, a famed archaeologist prepares to excavate the most historic and mysterious site in human history: the Garden of Eden. Brought together by chance, Will Eastgate and Olivia Nazarian are menaced by a common foe—an obscure order, the Flaming Sword, tasked for millennia with protecting Eden and keeping its location hidden, using whatever means necessary.

In a race to save their own lives, and expose the truth about man’s ancient past, Eastgate and Olivia follow clues gleaned from archives in London all the way to Iran and Turkey and, finally, to the desert of Iraq. Two powerful men follow their every move. Both have secrets to keep—secrets so great that their discovery would topple dictators and governments and forever reshape the course of human history.

In the heart of ancient Iraq, at the dawn of the Iraq War in 2003, conflicting ambitions collide, events set in motion decades ago come to pass, and a deadly conspiracy is revealed.

Filled with action and historical riddles, The Eden Deception is a fast-paced, intellectual thrill-ride.