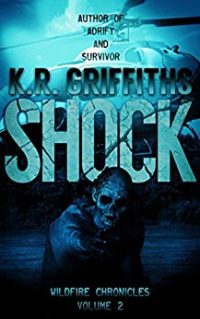 The team had been told it would be a straightforward mission.

Enter St. Davids, now little more than a ghost town, retrieve the target and return to base.

Trouble is, the target is a man named Victor, and it looks like somebody else got to him first.

And St. Davids is anything but a ghost town…

Shock is a novella sequel to K.R. Griffiths’ acclaimed debut Panic, and is the second installment in the post-apocalyptic horror series Wildfire Chronicles.