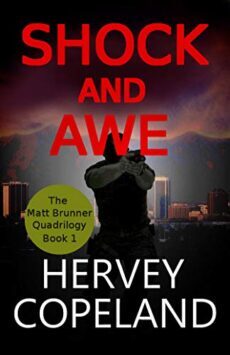 When a sniper kills a man in downtown Phoenix, it sets all kinds of wheels in motion.

The victim is a high ranking drug cartel member, and the leadership of the organization wants revenge. The mission is given to their most ruthless and effective assassin and the order is clear, track down and eliminate the killer.

Matt Brunner, a former US Marine and Gulf War veteran becomes an accidental pawn in the cat and mouse game that follows, and has to use all his expertise and experience to stay alive. But is it enough? The cartel is powerful and has tentacles that reach far and deep, and very few people manage to escape its grip.

Shock and Awe is the first instalment of the Matt Brunner quadrilogy, which follows the protagonist as his life starts to spiral out of control.
A fast paced action thriller that is guaranteed to get your heart pumping!