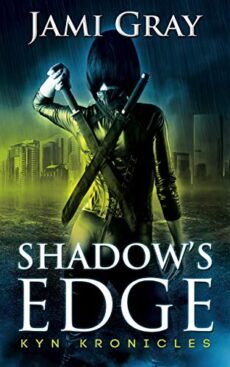 But can she stop her prey from exposing the supernatural community one bloody corpse at a time?

Everyone fears the hunter in the shadows—especially the monsters…

Raine McCord, forged in the brutal maelstrom of magic and science, is an elite hunter at home hunting monsters through the murky shadows of the supernatural world of the Kyn. Not the easiest job when you’re trying to keep the humans ignorant of the existence of creatures typically confined to campfire tales. It gets harder when a series of disappearances and deaths in the Kyn community suggests someone wants to rip the thin veil of secrecy aside and expose the horror lurking behind the curtain.

To offset the challenge, Raine is forced to partner with another hunter, the sexy and tantalizing Witch-Fey, Gavin Durand. Their partnership proves to be as challenging and dangerous as the prey they hunt. Especially when the trail leads back to the foundation that warped Raine’s magic as a child and threatens to resurrect the nightmares of her past.

Determine to stop the threat to the Kyn, Raine and Gavin stalk their prey through a maze of lies, murder, and greed, but will the price they pay be too high?