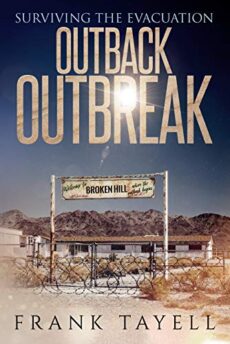 The outbreak changed everything, but there are some bonds even the undead can’t break.

It’s been six years since Pete Guinn last saw his sister, Corrie. He always hoped to see her again, but feared she was dead. When an elusive billionaire reveals Corrie is living under an assumed name in the Australian outback, Pete unquestioningly jumps at the chance of a reunion. But you can’t win the lottery without buying a ticket, and billionaires don’t do favours for free. Corrie is in hiding from her old employer, and from the Rosewood Cartel. Now that they’ve both found her, only a miracle can save the two siblings, and what happens in Manhattan can’t be described as miraculous.

What begins as a viral outbreak soon turns into an impossible horror. People are infected and die, only to rise up and continue transmitting the infection. Even as the army is mobilised, the virus spreads beyond the borders of the United States. Nowhere is safe from the living dead.

As Australia is quarantined, the mining town of Broken Hill becomes a transit hub for the relief effort. Tourists are evacuated while civilians are conscripted, Pete and Corrie among them. Together with a bush pilot, a flying doctor, and an outback cop, the struggle to maintain civilisation begins. Supplies run low. Looting is rampant. Laws are forgotten, especially by the cartel who haven’t abandoned their search for Corrie and their quest for revenge.

A zombie apocalypse set in Broken Hill and beyond as the Australian quarantine begins.