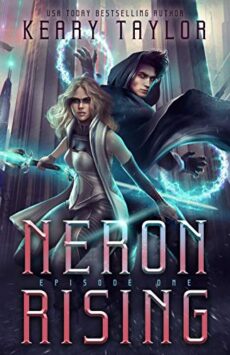 He takes a step forward, shaking his head twice, with absolute conviction. “You’re not nothing, Nova.”

In the Eon galaxy, Dominion controls any planet with solid Neron deposits, and Nova just found out they’re coming for hers. Korpillion isn’t supposed to have any Neron—the galaxy’s purest form of energy—but Nova Ainsley has been working with the owner of a secret mine for months, building highly illegal weapons that can wield Neron. She wants off Korpillion, and selling these weapons will buy her and her father a ticket to another planet in the galaxy.

Neron is incredible on its own, but there are those who can wield it to their will, granting them the ability to read minds, see the future, and destroy worlds—the Nero. But this is a galaxy where they are ceasing to exist, and Dominion owns the last one in the known universe, using him to take over and destroy billions of lives.

An encounter with the last Nero shows Nova her future: it’s with him. She will stand by his side one day, her fingers laced through his, love and adoration in both their eyes, a dark queen to his evil, pawn king.

Fate or destiny, Nova will do whatever it takes to change their future, and that of the galaxy.

The Neron Rising Saga is a series of episodes. Episode One is 30,000 words. Neron Rising is a slow-burn space-fantasy romance.

« Into Twilight: A Cyberpunk Techno-Thriller – Free