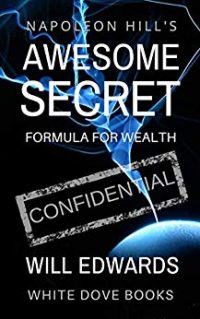 Discover the exact money-making formula used by millionaires the world over to create astonishing wealth.

Napoleon Hill’s early career was as a newspaper reporter, during which time he met and interviewed the wealthy entrepreneur Andrew Carnegie who issued him with a challenge. Carnegie (the richest man in the world at the time) commissioned Hill to interview 500 extremely successful men and, from the experience, distil the secret of success into a simple workable formula.

He accepted the challenge and the resulting book – Think and Grow Rich – took him 20 years to produce. This book has sold more than thirty million copies worldwide and been responsible for creating more millionaires than any other philosophy of achievement. In Will Edwards’ book Napoleon Hill’s Awesome Secret, his ‘secret’ for creating wealth is outlined in a simple 7-step formula that anyone can apply to create abundance.

One of the best self help books on the subject of creating wealth and making money, download your copy today and begin using the secret to change your life, acquire the millionaire mindset, and start creating your own personal fortune!

Be sure to subscribe to our email notifications to ensure you don't miss out.