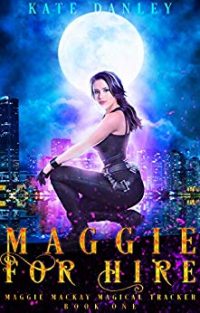 When monsters appear in Los Angeles, Maggie MacKay is on the job.

No one is better at hauling the creepy crawlies back where they belong. No one, that is, except her dad, who disappeared without a trace in the middle of an assignment.

Now an elf named Killian has shown up with a gig. Seems Maggie’s uncle is working with the forces of dark to turn Earth into a vampire convenience store, serving bottomless refills on humans.

The only hope for survival lies in tracking down two magical objects and a secret that vanished with Maggie’s father.

“A shot glass full of awesomesauce.”  – Dark Side of the Covers Reviews