Into Twilight: A Cyberpunk Techno-Thriller – Free 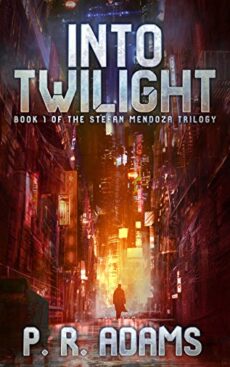 He does the government’s dirty work. When he’s double-crossed by one of his own, he’ll stop at nothing to take out the trash.

Korea, 22nd Century. Surrender isn’t in Stefan Mendoza’s DNA. So when a traitor betrays his black-ops team, he alone pushes through the torture and escapes with revenge burning in his mind. On the verge of a systems failure, he taps into his underground network for a set of cybernetic limbs. But his high-tech recovery comes at a heavy price—an assassination hit on a rising political star.

Filled with resentment for the cutthroat world of contract killers, he uses the hit job as a cover to track down the traitor. When he discovers he’s competing with other assassins for the same political target, he starts to piece together a sinister conspiracy that could lead him straight to the shadowy figure behind his betrayal.

Trapped within a hotbed of corruption, can Mendoza exact his revenge and win his freedom or will he spiral deeper into the twisted game of brokered death?

Into Twilight is the first book in The Stefan Mendoza Trilogy of high-octane cyberpunk techno-thrillers. If you like street-smart soldiers, complex conspiracies, and immersive sci-fi settings, then you’ll love P.R. Adams’s noir-style page-turner.