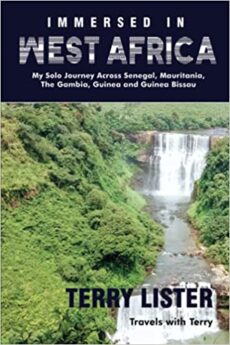 Terry Lister craved another leg of the journey. After making it his goal to see the planet in eight-week-long sojourns, he set his sights on visiting the one place that scares off most Westerners: West Africa. And with abundant research of the vast landscape under his belt, nothing would stop this global nomad.

From harrowing experiences with border police to escapades on crowded mini-buses, Lister embraced every challenge he encountered off the beaten path. And as his priceless interactions with locals painted a true picture of an often-misrepresented land, he took it upon himself to prove traveling through these five evocative countries is perfectly safe.

In a refreshing take on international travel, Terry Lister provides vigorous encouragement to those who have dreamed of touring this extraordinary region to take the leap of faith. And with heartening stories involving the residents, the optimism and lifestyles of those living thousands of miles away will inspire you to plan your very own inspiring excursion.

Immersed in West Africa is the eye-opening first book in the Travels with Terry travelogue series. If you like soul-searching adventures, breathtaking geographies, and intriguing backpacking anecdotes, then you’ll love Terry Lister’s motivational adventure.