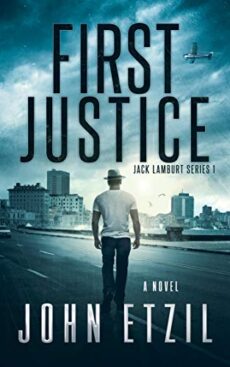 The only thing he has left is a passion for revenge. His first chance to get it could be his last…

Jack Lamburt is out for blood. After a brutal terrorist murdered his pregnant wife, he’s sworn not to allow another innocent soul to suffer a similar fate. So how can he say no when an old flame in the CIA recruits him for a covert mission to stop an extremist plot to butcher thousands?

Flying under the radar, the pair sets course for a Cuban hot zone and Lamburt’s first taste of battle. But the deeper they get into their black-ops assignment, the more he suspects their simple hit may be part of a shadowy conspiracy… with deadly consequences.

Can Lamburt walk the path of vengeance without coming home in a body bag?

First Justice is the fast-paced first novel in the Jack Lamburt Vigilante Justice thriller series. If you like gritty heroes, savage action, and moral dilemmas, then you’ll love John Etzil’s gripping novel.Buy First Justice for a blast of retribution today!

« So You Think Your Sister’s a Vampire? – Free