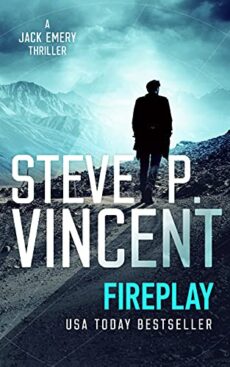 A chance lightning strike. A reporter in the right place. A scandal that will rock America

Journalist Jack Emery has seen it all. Embedded for the New York Standard with the 8th Marine Regiment in the heart of Afghanistan, he has covered everything from firefights to the opening of new schools. But nothing has prepared Jack for the story that is about to explode right in front of him.

When a convoy Jack is riding in is attacked by a lone zealot, Jack asks a question that puts him on the path to a sensational story. But he’ll soon learn that his struggles to find the hook are nothing compared to the dangers of getting it out.

The explosive Jack Emery series has been likened to Tom Clancy, Vince Flynn and David Archer. If you like breakneck pacing, non-stop action and twists that will leave you gasping, then you’ll love Steve P. Vincent’s bestselling books.