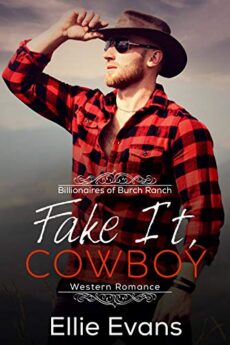 Joanna Carver is one month away from traveling the world—or at least as far as she can while working on a cruise ship.

She’s excited, except for one thing: she’s being stalked by her ex-boyfriend. And when he corners her in a grocery store, she grabs the arm of the single hot man walking up to her, proclaiming they’re engaged.

Billionaire, Tucker Burch is the eldest of the Burch kids, and he’s got a month to get married. His grandfather wanted him settled, and the only way he can get the deeds to the majority of the Burch Ranch is if he’s married by the time he’s thirty-one. The only problem is he doesn’t want to marry, not after he had his heart broken.

When Joanna needs a safe haven for a month, it’s like the universe is looking out for him. They agree on two simple rules: everything is pretend, and no feelings allowed.

But fate has other plans for them…can Tucker let down his walls and let Joanna in? And will Joanna find trust with the billionaire bachelor?