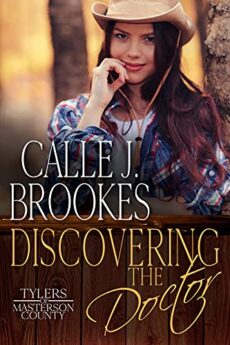 Safety is more than just elusive… It doesn’t exist.

Pip Tyler is safe at her family’s ranch, tending her horses, helping raise her younger brothers—and healing from an attack when she’d been a teenager. Her self-imposed isolation ends when her older sister marries the sheriff of Masterson County. Now she has to make room in her life for her brother-in-law—and his three brothers.

Bigger, stronger, larger-than-life, the Masterson brothers have her quaking in her boots every time they get near. Pip doesn’t know how much longer she can hide. From life. Or from them.

Dr. Matt Masterson spends his days building the only veterinary practice in Masterson County—and his nights wondering how to break through Pip’s fears. How to get close to the woman he can’t forget.

But Matt isn’t the only one who wants Pip Tyler. Someone from her past will stop at nothing to have the woman he’s always wanted…as his future.

« Sealed with a Kiss: A Small Town Christmas Romance – Free