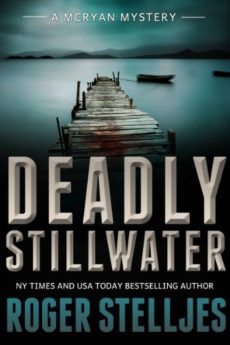 An abduction is just the beginning in a case of betrayal and revenge that will ultimately strike at the soul of the St. Paul Police Department. The ruggedly handsome Mac McRyan, a fourth-generation cop, is faced with a complicated brazen daytime kidnapping, a media storm surrounding the case, and political scrutiny. From the searing streets of St. Paul to the murky waters of the St. Croix River, DEADLY STILLWATER is a book you won’t be able to put down until its last gripping minute.

Vince Flynn described Roger Stelljes as “A powerful new thriller voice.” Fans of John Sandford, David Baldacci and James Patterson will enjoy this fast-moving story of murder, greed, and treason; the cast of colorful characters, and its setting in and around historic St. Paul, Minnesota.

Deadly Stillwater is being offered as a free mystery book as an introduction to the McRyan Mystery Series.