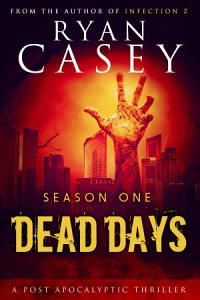 This collection contains the complete first season of thrilling zombie apocalypse saga, Dead Days — all SIX episodes that make up the first series.

How would you survive the Dead Days?

Riley Jameson is a regular guy. A little hard-of-luck and going through a rough time at work, but nothing he can’t handle.

That was until the creatures rose. The dead started walking. Feasting on human flesh, their hunger insatiable. The police are gone. The government has collapsed. The world as Riley knew it has changed, forever.

In this new, terrifying world, Riley is forced to think quick and act fast in order to survive. His morals will be pushed to the very limit, forcing the question: can humanity survive the onslaught of the dead, not only on the outside but on the inside?