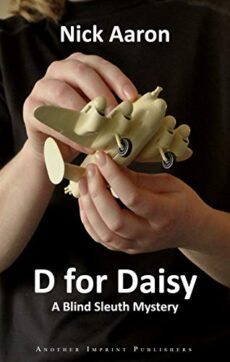 World War II. During the attacks on Berlin in the winter of 1943-44, wave after wave of British bombers swept over northern Europe.

A fair percentage of the bombers would fail to return from these operations, and RAF planners calculated the life expectancy of the airmen in weeks rather than months. It did not seem strange when a Lancaster named D-Daisy landed at its base in England after a bombing run, and a member of the crew was found dead.

However, one person soon came to the conclusion that this man had been murdered. And the person who discovered this happened to be blind since birth. Her name was Daisy and she was the victim’s wife. She was very blonde and very pretty; also very young. Therefore, no one would listen to her. So she was going to have to find the murderer on her own.

“Using the carefully plotted twists and turns of the murder mystery, throwing in a highly unconventional blind sleuth with her very own take on the world, Nick Aaron lifts the genre to a more thoughtful level.” – The Weekly Banner