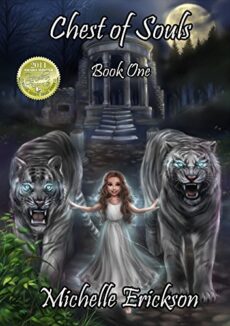 Talon and Brenna are being hunted.

Brenna doesn’t know that her mother is Hi-Sha of Eyes, or that her father was an assassin and he’s supposed to be dead. Brenna is safe because she is oblivious to all but Talon.

Once he is ordered to protect her, he’s had to fight mythical monsters, run from an assassin, and escape a forest full of carnivores. His father burned down their cottage and left him with people he just met. He isn’t sure who to trust.
In the meantime, the Chest of Souls waits to be powered and neither child can guess the price.

“A new series sure to please the pickiest fantasy readers…” Anne B. for Readers Favorite

In The Mind Trilogy: The Doctor Wise Series – Kindle Unlimited »