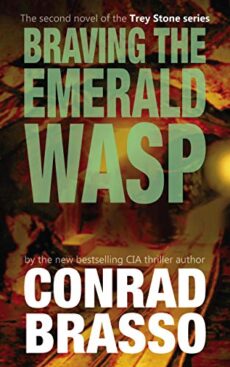 Trey Stone is back and the situation is dire!

Conrad Brasso comes storming back with an action-packed sequel to his great-selling first book!

There’s not much that can pull Trey and his family back into the action after they’ve been carefully put into protective custody. But when the granddaughter of the former President of the United States joins her soccer team for an international tournament of goodwill, the young girls make a perfect target for one of the most sinister trafficking rings in the world.

From Botswana to Libya and Washington D.C. to Rome, Agent Stone and his talented team of operatives have a job to do that requires them to be on high alert. But how does a spectacularly beautiful escort threaten to burn everything down, especially when she’s been found already dead in a back alley of Koreatown?

« Lipstick and Lies and Deadly Goodbyes (A Vampire Comedy) – Free