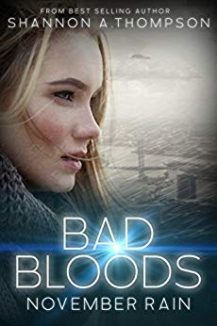 The Young Elites by Marie Lu meets Renegades by Marissa Meyer in this action-packed dystopian fantasy series that has readers calling it “addictive.”

Her very existence is a crime… Seventeen-year-old Serena isn’t human. She’s a bad blood, and in the politically corrupt city of Vendona, bad bloods aren’t allowed to live. When Serena is aided in an escape moments before her execution, a revolution is sparked. While on the run, she’s forced to put her trust in a man she knows little about.

Daniel will do anything to stop the twelve-year war that has killed so many of his own. When Serena falls into his life, he sees the opportunity to fight back and stop the eradication of all bad bloods. But there’s more to Serena than meets the eye. They share a connection to his tragic and mysterious past, and the two of them united together might just be Vendona’s only hope.

United or not, a city will fight, rain will fall, and all will be threatened by star-crossed love and political corruption.

« He Loves Me Not: Taboo Wedding Billionaire Steamy Romance – Free

Into Twilight: A Cyberpunk Techno-Thriller – Free »