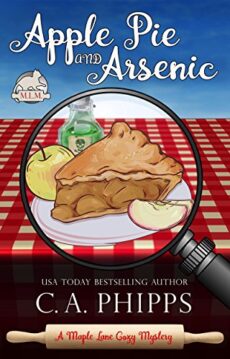 Can Maddie clear her name?

Finding the body was a shock. Accused of putting it there pushes Maddie over the edge and into the Sheriff’s path. Her ex-flame is as confused as she is when the mystery heats up with another batch of clues.

Danger threatens at every turn, and when Maddie ends up on her own, scared and out of her depth, it seems that even an award-winning baker isn’t safe from Maple Falls’ first serial killer. As the timer ticks down in the race to find the murderer before Maddie’s put in jail or the body count climbs, she enlists the help of her friends.

If only solving murder were as easy as apple pie!

Do you love Murder She Wrote? Then you’ll enjoy Maddie’s style because she’s not taking no for an answer either.