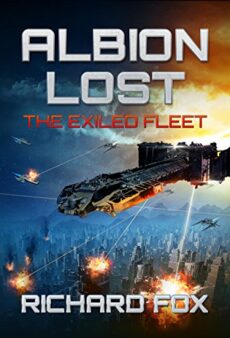 For centuries, the Daegon waited. They plotted. And now they are ready to strike.

The core worlds of settled space enjoy a tenuous peace, unaware and ill prepared for the threat building beyond the furthest reaches of humanity. The star kingdom of Albion stands as a shining light of justice and mercy in a harsh galaxy, and they will be the first to suffer the Daegon’s fury.

Defying his low born status, and despite his self-doubt, Commodore Thomas Gage has risen through the ranks by sheer grit and determination, defending Albion from brutal pirate clans.

And when the onslaught comes, Gage and his fleet may be Albion’s last hope for freedom.

A new military science-fiction series for fans of Honor Harrington, Earth Alone and Old Man’s War from the author of the best-selling Ember War Saga.