A Scarlet Fever (A Tale of Vampires and Demons) – Free 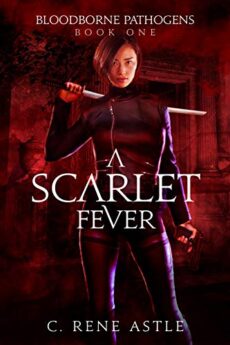 Mina’s dying for life to return to normal.

But she’s still reeling from her mother’s sudden death. What she wants most in the world is to get back to art school and her job at a downtown tattoo shop. Then her roommate suggests a night of dance, drink and distraction.

Despite a backlog of schoolwork, Mina agrees. She soon finds herself in the arms of a sexy stranger with amber eyes. When she invites him home, she doesn’t realize they’re the eyes of a devil in disguise.

The next morning, she tries again to get her life back together. But plagued by a wicked headache, unusual hungers and a burning desire, she realizes something is wrong.

As she struggles to figure out what’s going on, she’s confronted by a tenacious vampire with tales of hellish creatures and ancient battles, she’s forced to ask herself: Will life ever be normal again?

Find out for yourself in this dark, gritty story!